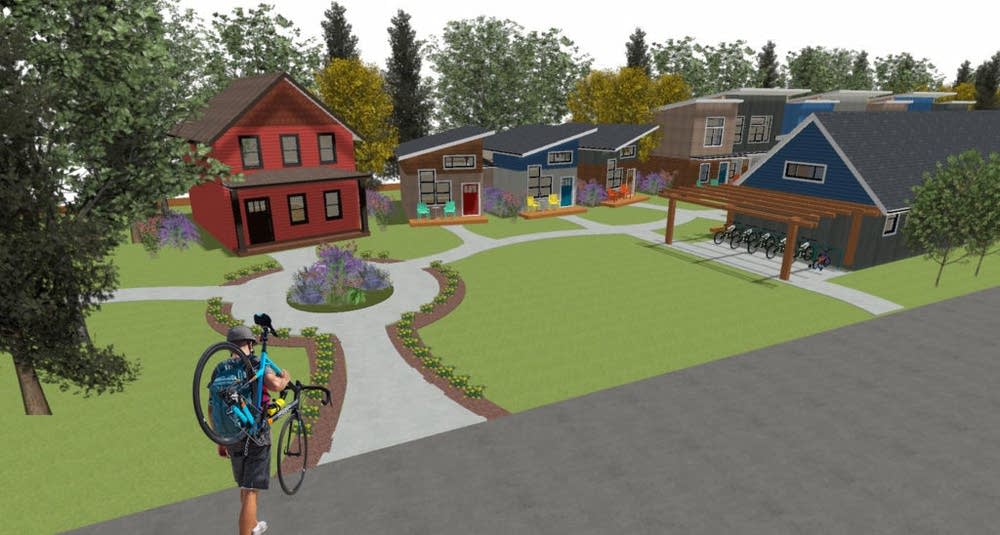 Gentrification: the ugliest term in housing, and one of the biggest drivers of inequality. Family A earns $40,000 a year; Family B earns $100,000. Family A lives in Greenwood where rent is $1000/month; Family B lives in Riverdale where rent is $2000/month. Developer builds a new complex in Greenwood and charges $1500/month. It’s a great deal for Family B, enough for them to move from Riverdale to Greenwood. But it’s unaffordable for Family A, which already spends 30% of its income on housing. Repeat enough times, and Family A can’t afford to live ANYWHERE in Greenwood, forcing them to move someplace less desirable. Meanwhile all the Family Bs now living in Greenwood are saving more income than before. Inequality grows.

Trendy tiny houses, with a high cost per square foot, are a prime example of the sort of housing that entices Family B. And the industrial east side of St Paul, Minnesota, looks a lot like the proverbial Greenwood. So Loren Schirber’s proposal for East Yard, a 52-unit tiny house village on a 3-acre lot, has a lot of residents worried about gentrification. The expected price tag of $130,000 to $170,000 (for a unit no larger than 530 square feet) bears out this concern.

But wait. Haven’t I previously hailed tiny houses as a tool for anti-gentrification? The key to integrated neighborhoods is to provide housing for a wide range of incomes side-by-side. But any such balance is an unstable one, easily upset by a few wealthy residents who attend Developmental Review meetings and rally against new low-income developments. (The cited concerns tend to be crime, filth, or reduced property values.) Tiny houses as accessory dwellings offer mixed housing but spread them out, minimizing the usual concerns.

Schirber’s village of groundbound tiny houses (not on wheels) would follow a very different model. It would be an outpost of higher-income housing in a low-income neighborhood. As the first such development on the east side, it could help turn a segregated ward into an integrated one. But it could also pave the way for more developments as Family Bs across St Paul grow more comfortable with living in this Greenwood. Gentrification is a deep social issue, far more than one complex will change.

Read this Minnesota Public Radio story for arguments both for and against East Yard. (Winning sentence from the article: “‘I don’t know how anyone could live there,’ says Dick Goulet, who has lived in the neighborhood for 21 years.”)

Thanks to Laura Schutz.