Construction season is underway, and road crews are out in force repairing frost heaves and potholes. Both of these driving hazards occur because ice is less dense than water (which is why ice cubes float), meaning water expands when it freezes. Frost is just another word for underground ice.

If you take a soil sample, you’ll find anywhere from 1% to 10% water content. But that’s not enough water to swell and damage a road or a building foundation when it freezes. The real problem occurs when there’s a source to replenish the water as it freezes, causing a buildup of ice. How might that happen?

Go deep enough underground and the soil isn’t affected by surface temperature swings, staying around 50 degrees Fahrenheit year round. Fine soils, like silts and clays, have pores that can draw water up from the water table. (This gravity-defying property is called capillary action, and it’s also how trees draw water from the ground up to their leaves) With a continuous supply of water freezing above the frost line, an ice-filled region forms underground in the shape of an oval or lens.

As an ice lens grows it displaces the soil around it, causing a frost heave. Then, in the spring, the ice melts and leaves a void. With nothing left to support it, any soil above collapses into the void… and there you have your pothole.

A frost heave (or pothole) can really mess up a work of construction, so engineers and builders design to avoid them. One way, of course, is to prevent the ground from freezing. If your house is heated, then you could rely on heat escaping through the floor to keep your foundation above freezing… but that means you’re wasting energy, and it leaves you forever paranoid about what happens if you lose your heat source. A better solution is to surround your soil with insulation – in the floor and around the perimeter – so it neither draws heat from your house, nor freezes.

Many buildings are built with a deep foundation wall extending below the depth of maximum frost penetration. As the map shows, that depth depends on your location. New York City and Long Island can expect less than 31 inches of frost, while the same state’s North Country designs for penetration up to 70 inches. (In Massachusetts most builders use 48 inches as a rule of thumb, though this depth is conservative for most of the state.) An alternative is to build a frost-protected shallow foundation extending out from the building on all sides.

Another important frost-protection technique is to prevent the capillary action that allows ice lenses to form. Coarse soils like sand and gravel have large voids between particles, too large to draw water. If your existing soil is finer, you can excavate and then fill below the structure with an appropriate soil.

Clayton had his basement filled in by Messier, the same company that lifted his house. The Messier crew walked a vibrating compactor over each layer of fill to make it as dense as possible. As the engineer, I had the final say as to whether the fill was sufficiently compacted. So how did I do that?

The most convenient way to test the density of a fill material in place is to take a sample. For starters, I excavated down 8 inches, because the surface doesn’t compact much at all – the vibrating device actually loosens surface fill while it compacts the fill below. Then I scooped out a sample from that depth, with a volume of about two cups. I was very careful to ensure every particle I scooped out made it into my storage container.

Density equals mass divided by volume, and I determined the mass of my sample easily on-site with a kitchen scale. To find the volume, I used the sand cone test, which looks like this:

The translucent white container is filled with sand. When I open a valve, the sand pours out through the metal cone and into the hole I scooped out. When the sand stops moving, I know the hole and the cone are full, so I close the valve and lift up the apparatus:

Now with just a few extra bits of information – the density of the sand (which I know ahead of time), the volume of the cone (standardized), and the mass of the apparatus before and after the test (use the scale on-site) – I can calculate the density of the fill I scooped out.

I’m not done yet. Proper compaction depends not on fresh-out-of-the-ground density but on DRY density. And the most convenient way to dry a sample quickly is with… wait for it… a microwave oven. I borrowed Clayton’s for the task, checking the decreasing mass of my sample after each minute until the mass stabilized. Finally, I calculated the moisture content of the original sample by comparing the fresh-out-of-the-ground density with the dry density.

As it turned out, Clayton’s compacted fill had a dry density well above the minimum density I specified. (Great work, Messier!) The moisture content however was a little low at first, meaning the fill was too dry. Fortunately, the remedy for this compaction issue is simple: just add water. Sandra spent a long morning spraying the entire excavation with a hose, and my last few samples had a moisture content exactly where I wanted.

Once Clayton’s house was successfully elevated 9 feet off the ground, it was time to fill in the basement. I specified the type of fill to use – a crushed gravel that drains well and doesn’t compress – and Clayton ordered 280 cubic yards of the stuff, delivered truckload by truckload. Messier, the house lifting company, also served as the excavator, and it was their job to spread the fill in the basement and perform a compaction.

Fill is typically placed in layers, called “lifts”, 6 to 12 inches deep. Messier placed five lifts, each 10 inches deep, to reach the required total depth of 4 feet 2 inches. Crew member Calvin drove a Bobcat to carry fill into the basement and spread it evenly. Norm operated a backhoe outside the house to keep the fill supply close at hand, and other crew members in the hole checked level using a laser. 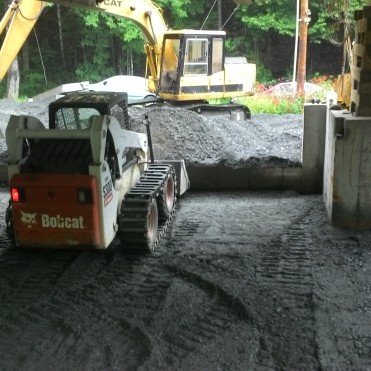 But freshly placed fill is quite loose, and the slab for the new ground floor wants a stable surface underneath. That’s what compaction does: it makes the fill denser and stabilizes it. For this part of the job, Messier brought two vibrating plates. You push them like lawnmowers, and they shake and shimmy the fill underneath to make the gravel particles interlock snugly. The vibrator’s effectiveness varies with depth, with the zone of maximum compaction occurring 6 to 18 inches below the surface. (That’s the main reason fill is placed in lifts rather than all at once.) After each lift, the Messier crew slid the vibrators over the entire surface of the fill until it was nice and flat and stable.

It was my job to test the fill and make sure it was compacted properly. How did I do that? I’ll save that tale for next time.