There’s a lot of certainty in structural engineering. The path a weight takes through a structure can be predicted by mathematical equations. And the most common building materials – steel and concrete and to a lesser extent wood – have a well-known strength, elasticity, and other properties. Geotechnical engineering, on the other hand, is not nearly so simple.

Soil comes in a limitless variety. Its strength varies based on what particles it’s made of, how much it’s been squished down (by a history of pressure on top of it, or by deliberate compaction), and how saturated it is with water. In fact, water is so significant to a soil’s properties that geotechnical engineering calculations are first solved for absolutely dry soil and then adjusted for the moisture content. 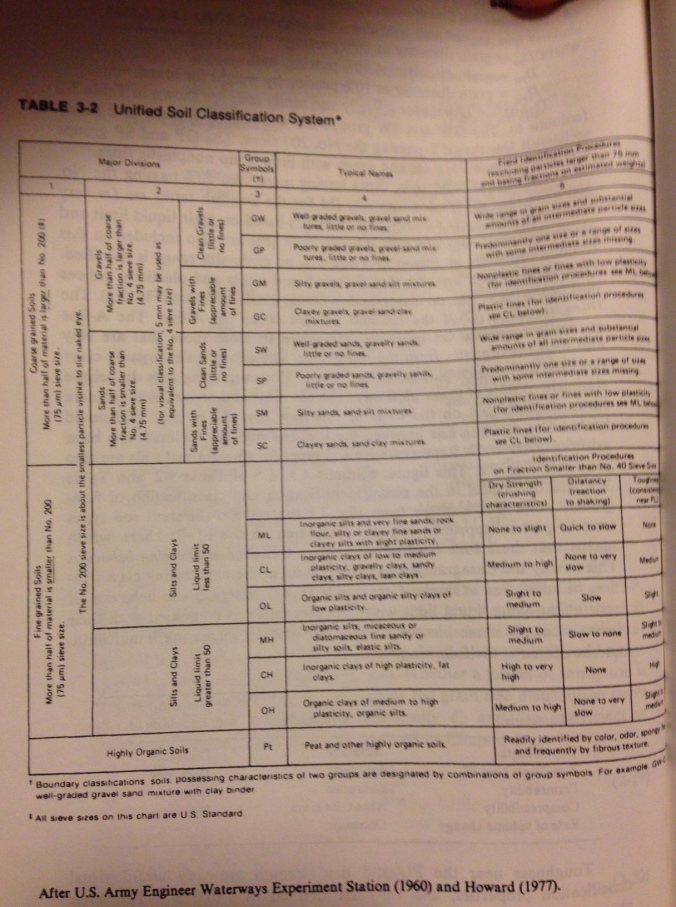 United Soil Classification System, the most common way to do it.

So where to begin? We can start by classifying soil types. I like the above table a lot – it’s like the Periodic Table of Elements for dirt. The first thing that distinguishes soils is the grain size. If it’s bigger than 4.75mm diameter (about the size of a pencil eraser), it’s gravel. If it’s smaller than 0.075mm diameter (about the diameter of a human hair), it’s either silt or clay. If it’s between 0.075mm and 4.75mm diameter, it’s sand. Silt grains are round and cohesionless (meaning they don’t stick together), whereas clay grains are elongated and cohesive (meaning they do stick together).

But most soils don’t have just one grain size. Most soils are a combination of gravel, sand, silt, and clay. A soil with every type in fairly equal fractions (by weight) is called a loam. A soil with two or three of the types might be classified as a silty clay, or a sandy loam. There are labs that dry out a soil sample, then shake it through a series of progressively finer sieves to determine the exact fraction of each grain size.

A simple field test can offer the same basic information, albeit with less precision. The first step is to take a handful of soil and add water until it reaches a puttylike consistency. Then push out a ribbon between your thumb and forefinger. You can classify the soil based on how gritty it feels and on the length of ribbon you get before it breaks off. See below!

Flowchart for field classification of soil.