Housing First is a strategy that moves people who live on the street directly into their own apartments, eliminating middle steps like shelters and group housing. Traditionally, a period of transitional housing would include job counseling and treatment for the issues that led to homelessness in the first place. The principle behind Housing First is that giving individuals the stability of an independent house right away makes that treatment more effective.

Many cities have Housing First programs, and increasingly they provide that independence with tiny house villages. This Curbed article compares 10 such villages. Most of them are funded by grants and private donations. Residents typically pay below-market rents of $200 to $400 or up to 30% of their income (the threshold for affordable housing as defined by HUD) and may enjoy rent-to-own options. 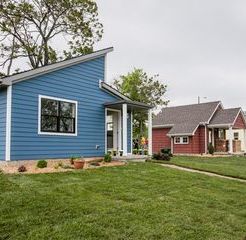 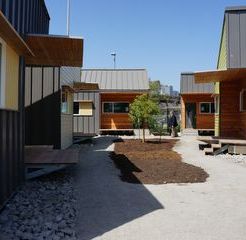 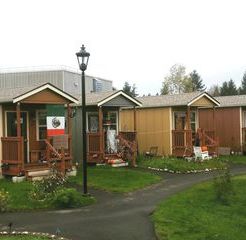 I appreciate CASS Community in Detroit, which houses students and seniors in addition to the formerly homeless. Integrated neighborhoods can more easily fold into the fabric of the city, whereas developments envisioned as 100% “homeless encampments” seem destined for neglect. In Dallas, The Cottages at Hickory Crossing has onsite medical and mental health care, making it a sort of assisted living facility. Several sites have community centers and shared gardens, akin to a pocket neighborhood.