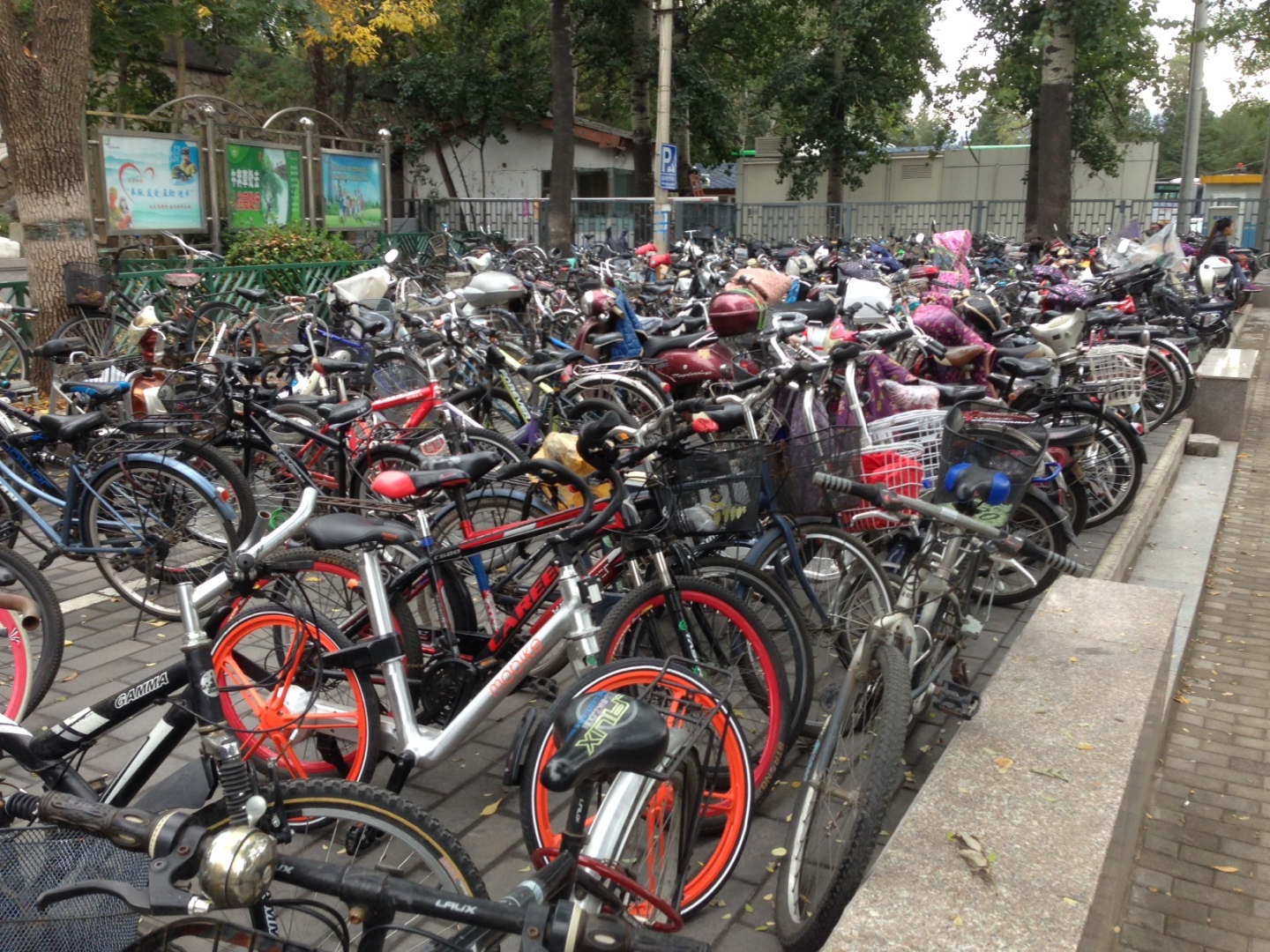 China has far more cars on the road than it did 20 years ago, but cheaper, less fuel-intensive modes of transportation remain the most popular. We’re not just talking bikes and mopeds, but an endless variety of vehicles.

Bicycles are supported by tons of infrastructure: major roads have fully separated bike lanes, and street corners have secure bike storage areas. Many bicycles are equipped with baskets to carry groceries and passenger seats to carry family members. Three-wheeled bikes fill the role of pickup trucks, with a durable and versatile cargo bed. It’s not uncommon to see stuff piled six feet high. Cargo nets and bungee cords hold the commodities in place.

Perhaps the most popular vehicle of all is the electric bike… a godsend when you travel long distances, up hills (Beijing is in a pancake-flat valley but the mountains are less than 50km away), or carrying heavy loads. Runner-up in popularity is the scooter, which does away with pedals entirely and runs purely by motor. All the modes I’ve mentioned so far are effectively immune to traffic laws – they’ll run red lights, weave through traffic, and even drive on the wrong side of the road. It’s with good reason that China prohibits most foreigners from renting a car.

Speaking of which… even the fully enclosed, fully motorized vehicles come in such variety that it’s hard to define where a “car” ends and another category begins. There are rickshaw-like vehicles with a basic box for weatherproofing, seating one driver in front and two passengers squeezed in a back seat maybe a meter wide. There are three-wheeled miniature cars resembling India’s Tata Nano, and tiny four-wheelers reminiscent of America’s Smart ForTwo. And then… sedans, crossovers, SUVs galore.

For those who prefer to avoid the traffic jams, or at least leave the driving responsibilities to someone else, public transportation abounds. The Beijing metro is the cleanest and fastest transit system I’ve ever ridden. Rivaling the New York City MTA in size, its trains arrive every three to four minutes and cost less than a US dollar to ride. Safety is a priority: riders must pass their bags through a security check, and in most stations glass walls separate the platform from the track, with doors opening only when a train arrives. Beijing also has an extensive bus network and a fleet of green-and-yellow taxis, steered by who are surely the nation’s boldest drivers.

For an American I’m pretty average in my transportation impact – I combine errands and I carpool when possible, which isn’t often in rural Vermont. After two weeks in Beijing I’m reevaluating my options. Can I add cargo capacity to my bicycle? Can I add handlebar-covering mitts, like Beijingers do, to keep my hands warm and extend the cycling season? Should I invest in an electric bike? Move closer to a city? I have the luxury to make these choices, and if I’d worried about climate change then I had better do my part.