This is Part 3 of a series about bridges. Read Part 1 and Part 2.

The suspension bridge joins the beam and the arch as the third and final type of bridge that appears in nature. Don’t believe it? Allow me to trace the evolution of this form.

The distinguishing feature of a suspension bridge is its main cables, which support the entire weight of the deck in pure tension. (No compression… remember, you can’t push on a string.) Isolate this cable and the natural origin becomes clear: a vine between two trees, perhaps, or the first strand of a spiderweb. 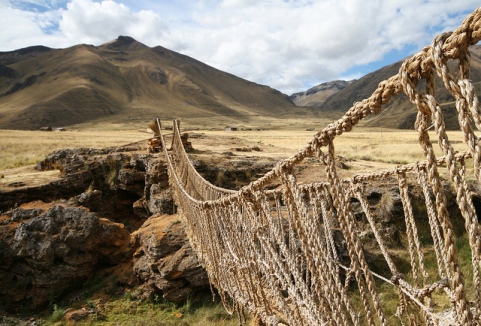 The most primitive suspension bridges built by humans were little more than a single cable in a strategic spot: a rope across a chasm, maybe accompanied by a pulley system, able to transport goods or the occasional brave person. As civilizations developed, suspension bridges grew in complexity to allow more traffic and safer crossings. The hand-woven rope bridges constructed by the Inca are astonishing in their simplicity and effectiveness. (They get rebuilt every year!)

But as with an arch, a cable’s usefulness is limited by its shape. The upturned curve is too steep for trains, cars, and even horses to travel. Advances in iron work in the early 19th century allowed a rigid deck to be suspended below the main cable – and now you can see the modern form of a suspension bridge (as well as the origin of the name). Smaller vertical cables, called suspenders, connect the deck to the main cable at regular intervals. Two towers – or more, if it’s a multi-span bridge – hold up the elevated points of the cable, and two anchorages back at ground level keep the cable taut.

Why is the deck below the main cable instead of above it? We saw last month that arch bridges go both ways, deck-above arch and deck-below-arch. While an underspanned suspension bridge is technically possible (and has been done), there are practical reasons it’s a poor choice. Instead of suspenders, you would need steel or concrete columns acting in compression to connect the cable up to the deck. Cables tend to have a small diameter compared to compression members, so the connection would be unstable and tricky to build. And anyway, in most cases, there’s insufficient clearance below the deck for a cable to hang down.

The longest bridge spans in the world are inevitably suspension bridges. As of 2016, the record holder is the Akashi Kaikyo Bridge in Kobe, Japan, with a main span of 6532 feet. The Golden Gate Bridge in San Francisco is fourteenth on the list with a main span of 4200 feet; built in 1937, it’s by far the oldest bridge in the top 25. We haven’t even begun to reach the limits of this form – spans over 3 miles long are structurally possible, if not financially. My favorite suspension bridge proposal is for the 2-mile-wide Strait of Messina between mainland Italy and Sicily, a project that has been approved and then canceled too many times to count. If completed, the towers will be as tall as the Empire State Building.