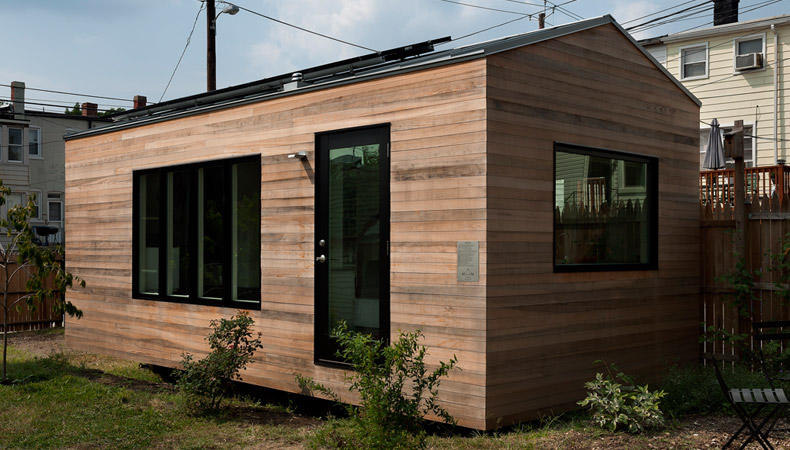 I met Brian Levy almost three years ago at the Yestermorrow Tiny House Fair, where he debuted his masterpiece of a tiny house on wheels. At that time, Brian had just finished building a prototype at Boneyard Studios, an outdoor showcase in Washington, DC that hosts numerous tiny houses as a demonstration of urban infill. Brian calls his house the Minim.

I’ve never seen so many brilliant design decisions packed into a single home. The Minim is wider than most houses on wheels, measuring 11 feet out-to-out. You need a state highway permit to tow anything wider than 8 feet 6 inches, but Brian reasons the permits are not that expensive and the house won’t get moved much, so it’s worth it for the extra space. The exterior is built using structural insulated panels (SIPs), which erect quickly and provide better insulation than most stud walls of the same thickness.

It’s hard to pick a favorite aspect of this house. I love the lack of interior walls, the multitude of windows, the full-width kitchen, the storage sofa/banquette, and especially the raised office that conceals a roll-out bed. On the other hand, I’m not wild about the exterior aesthetic, and with no roof overhangs I’m concerned about leak potential. Recently Brian has been working on a production line to build Minims for retail; the first one should be complete next month. Read all about the house and how to buy one here.