A picture is worth a thousand words. Structural engineers care about how forces travel through structures, but what does a force LOOK like? One way to visualize a force is with an arrow, which indicates both the location and the direction of the force. If the force is due to gravity, like an object’s weight, then the arrow points straight down. If the force is due to something like wind or an earthquake, the arrow might point sideways.

We’re missing one important piece of information: the SIZE of the force. We could indicate a stronger force with a bigger arrowhead, or a longer tail. But then it would be hard to tell the difference between, say, a 500-pound force and a 490-pound force. Instead, we’ll write the magnitude of each force next to its arrow.

A free-body diagram is how engineers visualize the forces acting on an object. The body in this case is the object, such as a snowmobile, which is reduced to a box. The diagram is free because it’s floating in space, without showing whether the snowmobile is on the ground or in the middle of a bridge or high on a pedestal. It doesn’t matter. All that matters is the forces. 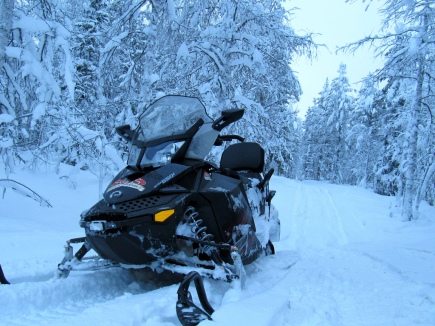 Newton’s Third Law of Motion states that every action has an equal and opposite reaction. Your snowmobile’s weight is always pushing it down, so there must be something pushing it back up. This reaction is called the “normal” force. (Why normal? It’s complicated.) Are you parked on the ground? Then the normal force is provided by the earth. On a bridge? Then that structure does the lifting.

Likewise, the wind tries to push your snowmobile to the right, so some force must push it back to the left. That force is the friction of your treads against the surface of the bridge.

What happens if the forces DON’T balance? The answer comes from Newton’s Second Law of Motion, which states that force equals mass times acceleration. Let’s say the bridge is slippery and the treads are jammed with ice, so there’s no friction. When the wind blows rightward the snowmobile starts to slide right, and its acceleration multiplied by its mass will be the same as the wind force.

Newton’s Second Law also explains what happens if you start to DRIVE the snowmobile across the bridge. In order for that forward motion to begin, the bridge exerts a forward force on your treads – or, equally, your treads exert a backwards force on the bridge. The magnitude of that force equals your acceleration multiplied by the machine’s mass.

Seeing the forces sketched out can reveal important characteristics, like how the bridge surface must provide enough friction to keep the snowmobile from slip-sliding away. That’s why when you need to solve a structural problem, the first thing you should do is draw the free-body diagram.