Back at Bob’s house, the sagginess of the original timber-framed structure made us uncomfortable. So we decided to do something about it.

I suspect the first-floor ceiling joists originally served as collar ties to keep the gable roof from collapsing outward. The horizontal component of the rafter load put the joists in tension and kept them taut, like rubber bands. When a full-length dormer was added to the north side in the 1970s, the joists were relieved of this tension and began to sag… and after we pulled up the floorboards this week, we noticed a definite bounce in some of them.

Mark and Bob pulling up floorboards.

Bob’s temporary fix was to jack up the joists at midspan using some Lally columns he had hanging around. He set them on a couple plates on the living room floor to distribute the load, ensuring that he pushed the ceiling up rather than pushing the floor down. For a permanent solution, Bob wants to hang these joists from the rafters above via a stud wall in the bedroom. I haven’t decided yet if this is a good idea. The rafters are overbuilt now so an extra load won’t compromise them too badly. 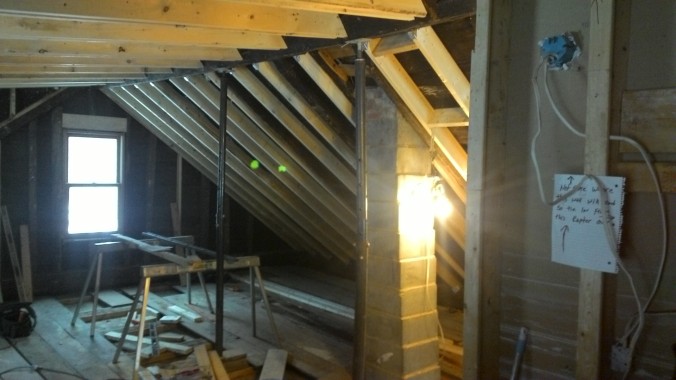 We shored the ridge beam the same way as the ceiling joists.

The roof needed to be jacked up as well, since the ridge beam sagged in the middle. Until this week, a beefy timber post in the middle of the attic held up the ridge beam near midspan… but it didn’t do much good, because the base of the post was hanging half off one of the ceiling joists with no other support below! Now we have two lolly columns to shore up the ridge beam, and when we replace the timber post we’ll be sure to carry the load path straight down to the foundation.

Hans and Mark finished installing new rafters, and I helped Paté pull up the living room carpet, working around a lifetime’s worth of furniture. Bob’s visions include an open stairwell, a hearth and wood stove in the living room, and rustic barn doors to close off the master bedroom. Believe me, by the time we finish remodeling the inside of this house, you’ll hardly recognize it. 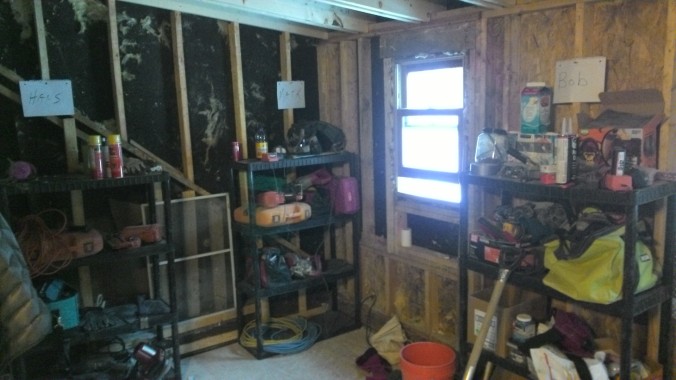 3 thoughts on “Jacked Up”