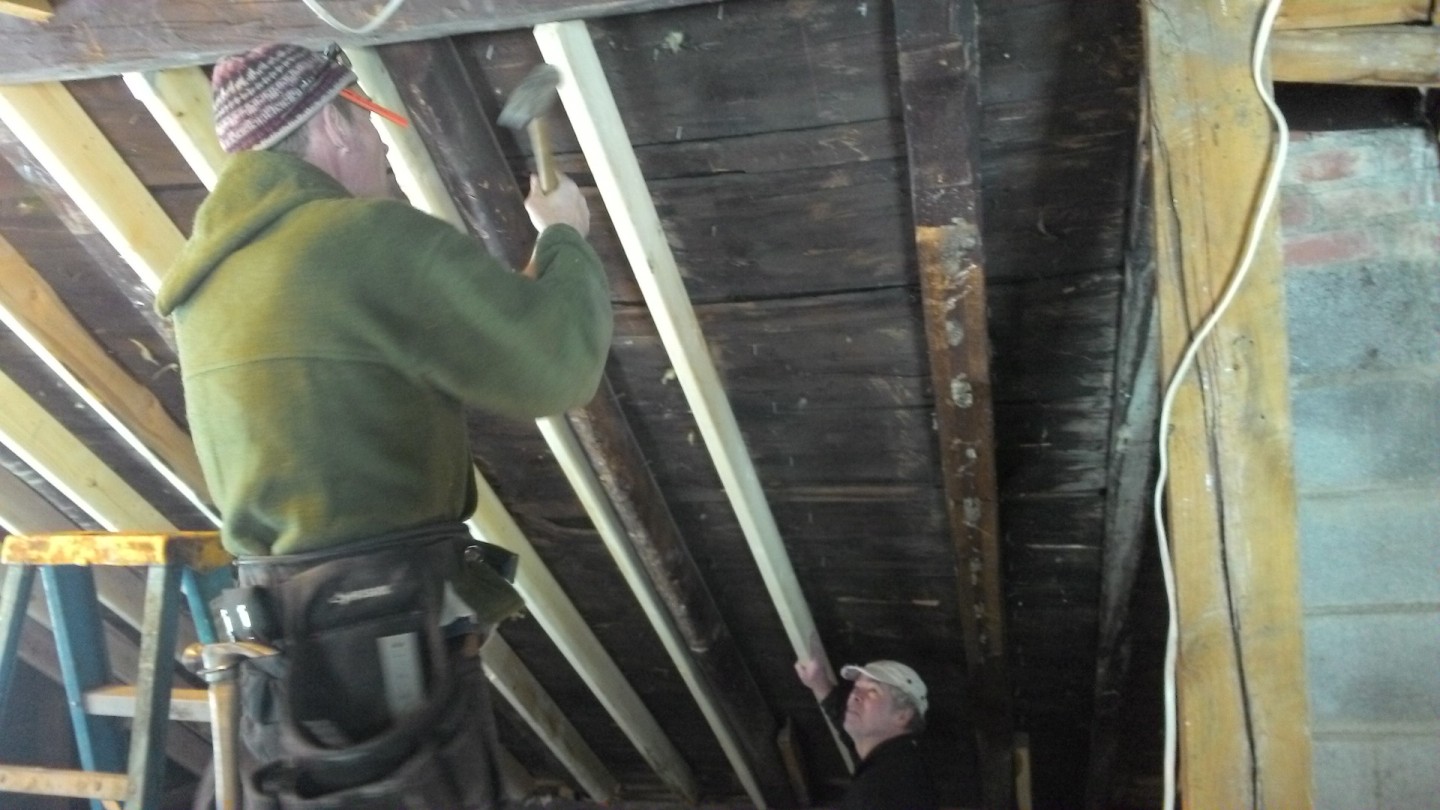 Working alone, one mediocre carpenter can’t remodel a house very fast. That’s why Bob also hired two freelance contractors with far more experience than I. Hans and Mark have an impressive track record around the Mad River Valley and beyond, and together with Bob and myself we make quick work of most any task.

Down came the remaining attic walls and ceilings, leaving only a plumbing wall between the bathroom and the guest bedroom. When we pulled insulation from between the rafters, we made a sobering discovery: the roof sheathing is rotten and saturated with moisture. The only proper repair is to replace the plywood… and the only way to get to the plywood is to remove the roof altogether. Well, Bob wanted a new roof anyhow. This just means we’ll have to do it sooner – likely in the next few weeks, rather than waiting for spring.

But none of us needs to brave the ice and cold just yet. First we’re installing new rafters, so the roof will have a structurally sound support system. For the 12-on-12 south face, the original timbers spaced 36 inches on center get supplemented by 2×6 rafters spaced 16 inches on center. For the 4-on-12 north face, the inadequate-looking rafters get 2×8 sister beams on both sides. We selected these layouts for a variety of reasons, including structural integrity, insulation depth, and ease of construction.

That last reason is crucial, because in such an old house nothing comes easy. Nails from the old roof stick through the sheathing everywhere, and we constantly remind each other to “watch your head!” Bob buzzed off many of the protruding nail shanks with an angle grinder, making space for the new rafters. I had a dickens of a time pulling out old nailers, often attached with enormous rusting nails and now in the way of the added lumber.

Most nefarious of all is the need to cut every single rafter differently. If this house was built plumb and square, it ain’t anymore. In particular, the roof sags in the middle, and approaching that point our rafters get shorter and our angle cuts broader. We quickly gave up trying to measure every location – instead, we start each rafter on the long side and trim it depending on how close it turns out to be. Hans does most of the cutting while Mark and I fit them and nail them off, though we’ll swap tasks if the need arises. We work well together.

The pile of debris has moved outside, awaiting a dumpster. Today I separated salvageable and burn-pile lumber from the true garbage like drywall, foam, and linoleum, and I covered the latter with a tarp. Could snow… and if it does, it’s understood most of this crew will take a day off to hit the slopes.