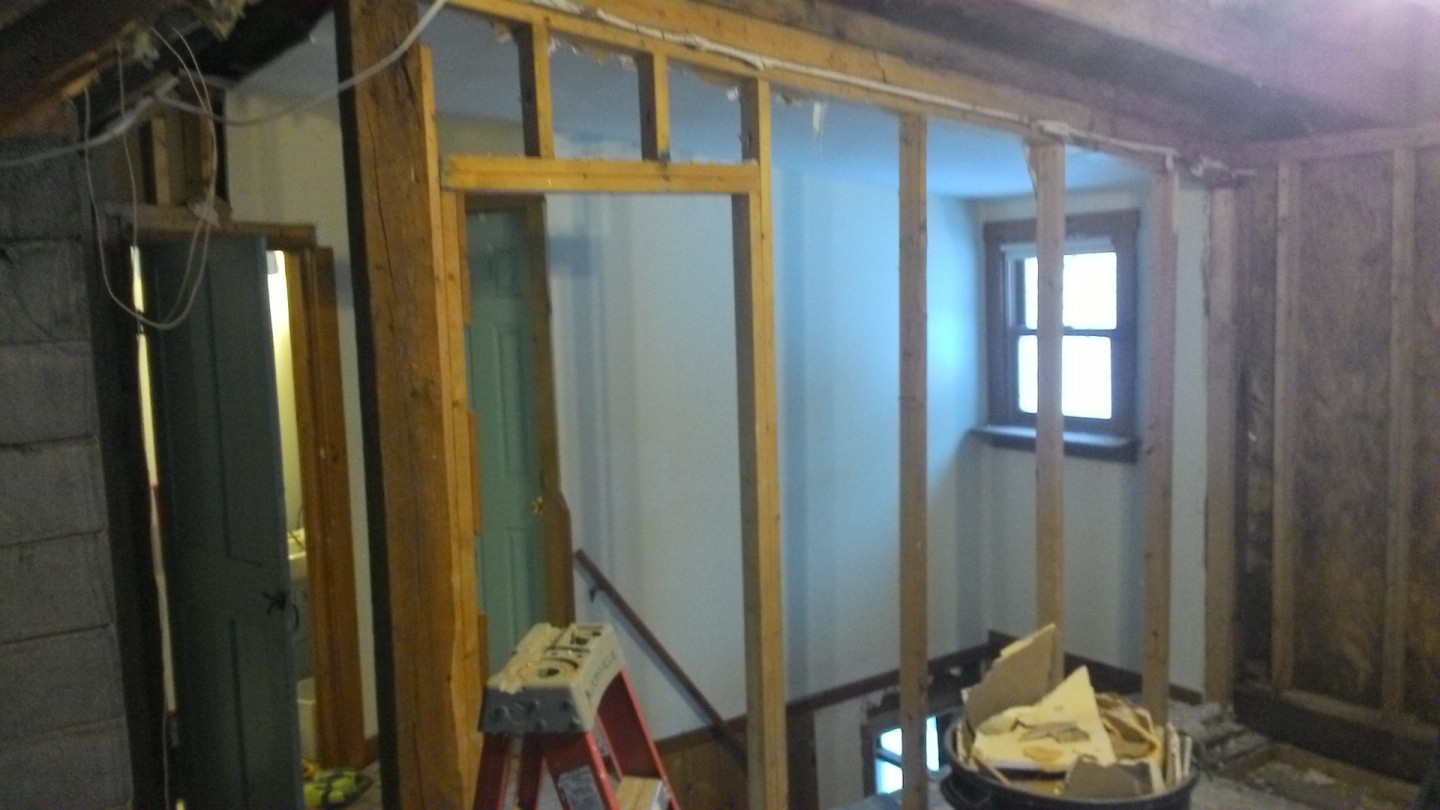 Bob intends to gut his entire second floor, leaving just a bathroom, and then rebuild the stairs and walls in slightly different locations to maximize comfort and utilization of space. Up until now I worked only on exterior walls, and I never touched the lumber that comprises the walls’ structure. On the interior today, it was a treat for me to demolish my first stud wall – the one that previously separated the stairs from the master bedroom.

The first step in removing any wall is to determine whether it is a loadbearing wall. If it’s not, then you can knock down the wall without professional assistance (or a building permit)… but you’d better be dead sure the wall doesn’t hold up another part of the house. Here’s where a structural engineer shines. I ascertained that Bob’s bedroom wall was NOT loadbearing, based on the following evidence:

1. The top plate doesn’t extend all the way across. A loadbearing wall needs to distribute the weight from above to its studs, and a continuous double top plate accomplishes this goal. Here we have a single top plate with two gaps.

2. Looking at the roof, you see rafters spanning in the same direction as the wall. A rafter carries its loads to supports at each end: the ridge beam at the peak, and the exterior wall at the bird’s mouth. Do any of the other rafters have extra support in the middle? Nope. It’s safe to assume the rafter above the interior wall works the same way.

3. The ceiling drywall runs continuously over the top plate. My first two reasons were structural; this reason is common-sense constructability. If the wall does support the roof, then how the heck did someone slide drywall in between? On the contrary, this detail indicates the rafters and roof were installed first, then a ceiling was attached, and THEN an interior wall was built between floor and ceiling.

Once I knew without a doubt the wall was not loadbearing, I switched gears from brain to brawn. First I removed the door and its frame. Then, with electricity off, I removed all the juncture boxes and pulled out the wiring. Drywall came down easily, then studs, then (with a little more effort) the top and bottom plates. As I worked, I clawed out every nail I came across… probably overkill but it makes the scraps safer to handle and avoids any chance of fumes if the wood gets burned. I cleaned up a little when I was done. Nothing like a well-swept workplace to come back to tomorrow!