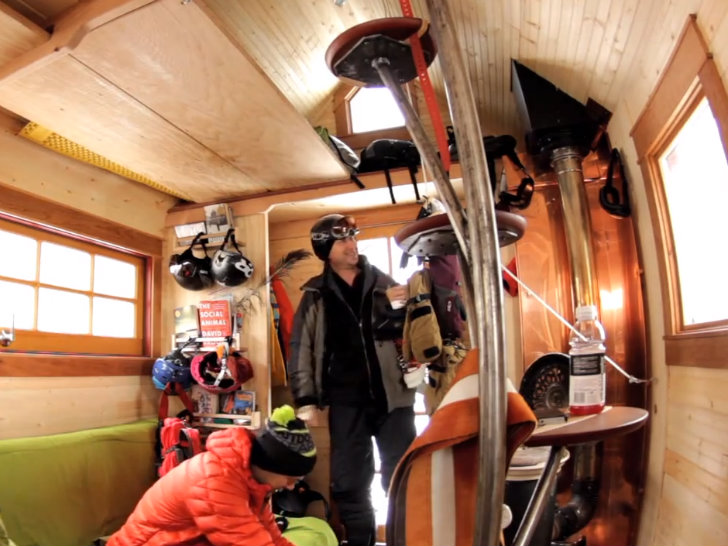 This week I’m sharing a video called Livin’ Tiny in which five ski buddies build a house on wheels and cruise the Rockies in search of epic powder. It’s a couple years old but I still love it. I’ll pad this blog entry with a few words about the house from a design perspective, but mostly I just want you to enjoy the video. It’s particularly appropriate to this blog since virtually everybody who’s worked on Colin’s house shares my skiing addiction.

This isn’t a place you’d want to live for very long, as it lacks a bathroom or kitchen (though they do boil water atop the itty bitty wood stove). And the crew is sponsored by Outdoor Research, so don’t think too hard about the finances… let’s just say if you want to be a ski bum this isn’t the most economical way. But it’s awesome to watch the five live together comfortably, each carving a personal space out of the 150-or-so square feet. I love how neatly they organize their gear on the myriad hooks and racks near the entry. And I appreciate the spiral stair, which takes up almost no visual space and doubles as shelving. Also note the beautifully crafted collar ties, which support the loft and prevent the roof from pancaking. They’re deep on both ends – using an arch action to help support the loft’s bending load – and shallow in the middle, increasing both headroom and aesthetic intrigue.

If you like the main video, you can watch Sidecountry Sessions for more adventures. The crew parks in ski towns and resort parking lots, and they get lots of attention from curious locals. What a cool way to promote tiny house living!