This has been a cold week. Therefore we spent as much time indoors as possible. Our main attraction is the kitchen where we completed all the perimeter cabinets, including the hutch, and we also began piecing together the island. Interestingly, the island is hollow: in the center is a dead space hidden behind all the cabinets. This space came in handy when we strung power to the microwave alcove: we had ample room to install an electrical box sticking out the back and thread a cable to it. Of course, a sleek countertop will eventually cover the void… NO ONE MUST KNOW.

In parallel with the island cabinetry, Terry put in some lovely work on the kitchen trim. All the wall cabinets get a crown molding over the top. The molding comes in stock lengths, so we had to measure and cut it ourselves, including all the 45-degree miter corners. The hutch has an additional bit of bottom trim to hide the gap to the wall and the power strip Colin stuck back there.

On Wednesday our appliances arrived! Bouchard-Pierce delivered a French-door fridge (which fits perfectly into its nook… built-in look without the built-in price!), a microwave, a dishwasher, and – the crown jewel – a commercial-grade range. The delivery men needed north of an hour to assemble and move the 300-pound, six-burner affair. The next day, Chuck’s came to hook up the gas, which involved a tricky conversion from natural gas to liquid propane. It certainly wasn’t easy to get the range working, but wow, it’s a beauty.

There’s plenty going on in other rooms as well. Chuck’s installed the hot water heater and hooked up some appliances to plumbing. The “fireplace guy” programmed the propane fireplace in the living room, which has a handheld remote control (wow!) and could easily heat the house all by itself. Carson and I wired up a bunch of electrical outlets, and Kiara helped me install cover plates. Abby basted the master bedroom in its first coat of paint, a calming peach color. And Colin installed two sconces in the living room, an attractive art-deco motif that we’ll carry throughout the first floor. 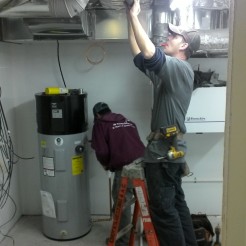 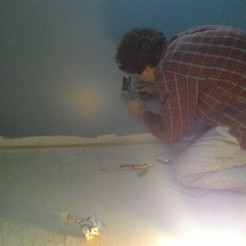 Alas, the construction season draws to an end soon, with Terry off to ski instruction in December. We’re eager to button up the exterior before he takes his leave, and accordingly we’ve frozen our fingers a bunch this week working outside as well. More on that next time.