Chris joined our ranks this week. He’s done carpentry since he was a kid and he jumped right into this project, offering ideas to solve tricky problems and a comprehensive knowledge of how a house fits together. So of course we put him right to work on the hardest tasks in the most dangerous places. 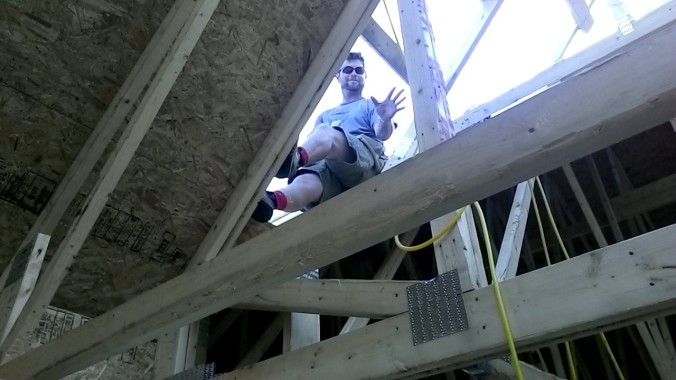 For starters, we just about finished roofing the Barn together. Chris took the coil nail gun up the ladder and pretty much stayed up there, shouting down measurements for cut shingles and other materials he needed. Once he was well stocked, I climbed up too and helped him open shingle packages and peel them apart. (Shingles are sticky on one side, so they come in pairs, back to back.) We’d covered about 80% of the back side when we ran out of time for the day.

View of the main roof from atop the Barn roof, nearing completion.

Then we switched operations back to the main house and made a big push to complete the roof trusses. Only the hard part was left, the triangle trusses that fill in where one gable dies into the other, and it took an entire day just to nail down those four triangles. What made them so difficult? Well, we had to layout the triangles 24 inches on center, same as the other trusses. We had to shim up each triangle until the peaks aligned correctly with both rooflines. We had to slide the triangles forward or back so the plane of each roof was level, which we confirmed by sighting frequently across the other trusses. In short, we needed to determine the correct position of each triangle in three dimensions at once… and since the bottom edge had a 45-degree miter, we had to support each triangle’s weight by hand until we got the position right. What an ordeal.

Looking up at the triangle trusses in progress. Note the shims underneath.

Things got easier the rest of the week. (I never thought I’d say maneuvering full sheets of plywood high in the air with 1½-inch-wide cleats for footing is “easier”, but here we are.) Once again, staging materials in accessible locations made an interesting problem. We gave ourselves one escape route as long as possible, near the southeast valley of the roof, and passed sheets up through there. Then we sheathed the south-facing roof as far as we could without ruining the tongue-and-groove pattern. Then we actually passed sheets over the roof peak to get them on the north-facing side, and sheathed that side too.

Eventually our plywood ran up against the east-facing roof we’d already sheathed. The roof lines had to meet in a diagonal-sloping valley. For the last piece of sheathing in each row, Chris measured the short and long edge and called the measurements down to Colin running the circular saw. Then Colin passed the cut sheet up to Chris and me, and we huffed it into place. At last we had no choice but to close off our materials-supply route, which meant Chris had to take the saw up on the roof and cut the final pieces of valley sheathing on precarious footing. When we finished nailing, we climbed down on the scaffold and through a window back to the second floor. 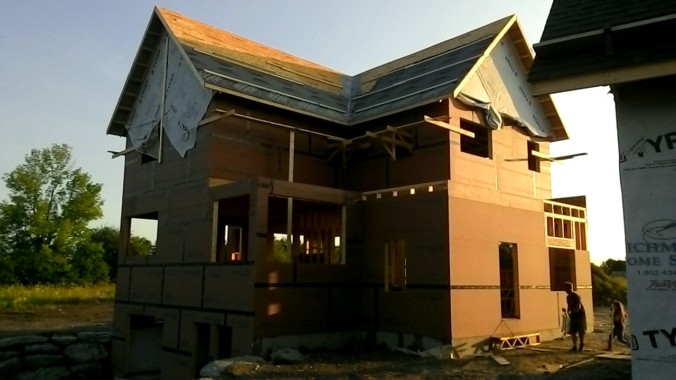 At last we applied sub-roofing to make the house dry. This task began with a strip of Ice & Water Shield along the bottom perimeter and up each valley – the places most susceptible to a leak. This heavy-duty material is stickier than wallpaper once you peel off the protective backing, and there’s a technique to sticking it flat on the plywood without creases. Chris coached me wonderfully; good thing there were two of us to perform the task. The rest of the roof we covered with meshlike Roofer’s Choice, which staples in place and is far simpler to handle even though the wind sometimes catches it.

It was awesome having Chris on board. He spends most of his time on commercial jobs, but he might come back to this project on weekends. I certainly hope to work with him again someday.

Chris and family. Everyone pitches in!

One thought on “Peaks and Valleys”